A celebration of Christopher Marlowe, Deptford 1993 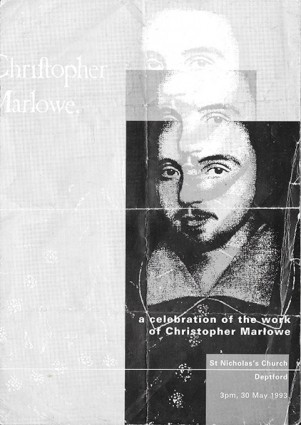 I was lucky enough to be amongst the guests at a celebration of the work of Christopher Marlowe at St Nicholas’s Church, Deptford, on 30 May 1993, 400 years after the dramatist’s untimely death. Marlowe is known to have died close to the church and was certainly buried at the north east corner of the churchyard on 1 June 1593.

The afternoon began with an introduction by the playwright, Peter Whelan, who’s historical work, The School of Night, about Christopher Marlowe and the world of Elizabethan espionage, had been performed by the Royal Shakespeare Company (RSC) a year earlier. Charles Nicholl, author of The Reckoning: The Murder of Christopher Marlowe, followed with a eulogy in praise of the dramatist and children from Alleyn’s School then performed The Seven Deadly Sins (Dr Faustus), directed by Eileen Chivers.

Individual contributions were provided by actors Sean Cranitch and Robert Swales, and by the Rev. David Scott, a poet, playwright and spiritual writer. Philip Franks and friends then performed an extract from The Massacre at Paris.

Events were enlivened with music from the Wormale Consort who performed madrigals and by David Thomas who sang Marlowe’s poem, The Passionate Shepherd to his Love.

Anthony Sher delivered an extract from Tamburlaine the Great and Janet Suzman recited a piece from Dido Queen of Carthage. 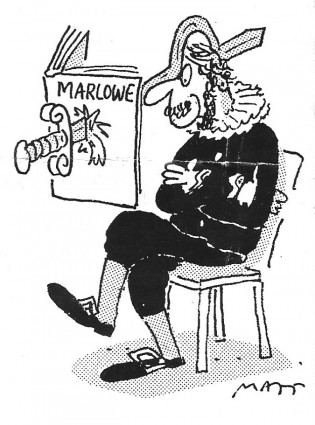 Simon Hughes MP thanked St Nicolas’s for welcoming the congregation and then spoke of Marlowe’s importance as a pioneering English dramatist and of the important role Southwark, Bankside and the Rose Theatre had played in his short life.

Richard McCabe and Nigel Cooke then joined fellow members of the RSC with an extract from Peter Whelan‘s The School of Night.

With the afternoon then drawing to a close, Sam Wanamaker read the dedication by Edward Blount to Sir Thomas Walsingham from his 1598 edition of Hero and Leander, while Peter Whelan hung a wreath over St. Nicolas’s indoor plaque commemorating Marlowe.

Finally, the whole congregation moved outside to the churchyard where actress Grace Kent read the final lines from Tamburlaine and the Bishop of Woolwich blessed the new outdoor plaque in Marlowe’s honour. 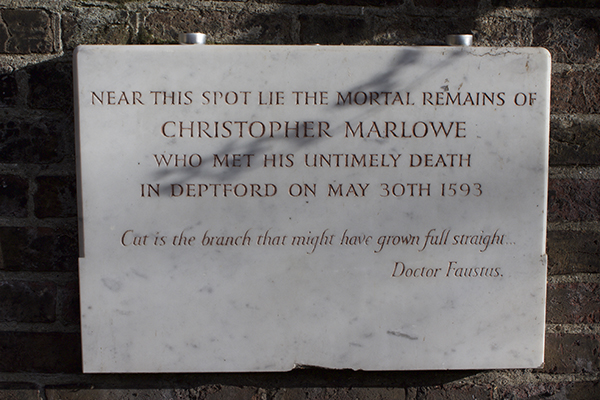 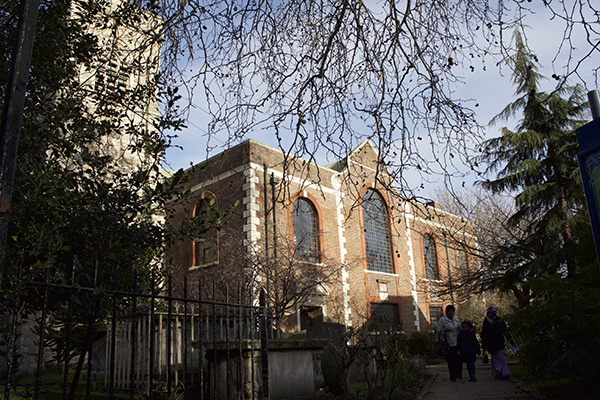 Writing this in 2015, 22 years after the celebration is perhaps a little late. I certainly remember thinking that afternoon how remarkable it was for so many of Britain’s great actors to be present, commemorating someone they had never personally known. Yet 400 years after Marlowe had departed this earth, his own dramas were still alive, and his words still being spoken, just as they had been by the great actors of his day.

Filed under: London History
← Previous Next →
We use cookies on our website to give you the most relevant experience by remembering your preferences and repeat visits. By clicking “Accept All”, you consent to the use of ALL the cookies. However, you may visit "Cookie Settings" to provide a controlled consent.
Cookie SettingsAccept All
Manage consent