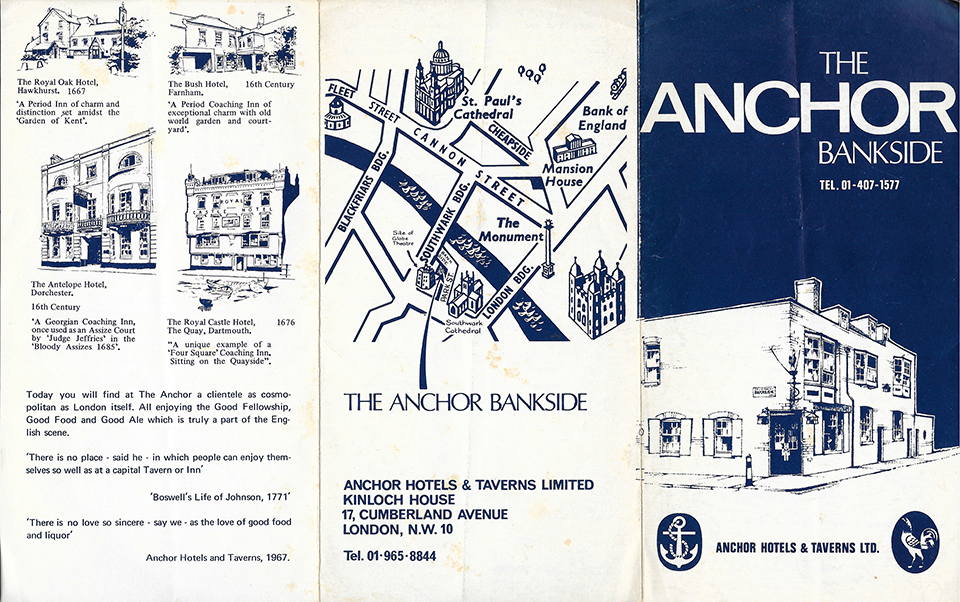 I first visited the Anchor Bankside after the very first rehearsal of my band, Pinetop’s Boogiemen, at Studio Drive in Clink Street in 1985. Timings were perfect as the 10 am-12-noon practice slot tied in nicely with pub opening times. An after-rehearsal drink became a ritual. If it was cold and damp, we sat inside in the “Samuel Johnson” room at the back. If the sun shone, we sat at tables just outside, and on all occasions, we were always one of the first to arrive.

Much of The Anchor’s charm has been lost in recent years as a result of refurbishments which to me seem to have sucked much of the character out of the building. The Premier Inn looming over the top doesn’t help matters, and the area around Bankside is so overrun with tourists these days that the chance of a quiet Sunday lunchtime pint by the river is no longer possible.

Last week I came across a leaflet for The Anchor Bankside which must be from the 1990s as the phone number has an ’01’ prefix. Curiously, The Anchor chose to reproduce copy from what must have been an earlier leaflet from 1967, and it is this text which I have included below. The grammar and use of capitalisation are theirs, not mine.

The internationally famous Riverside House, standing on the Banks of the Thames can claim a history and association with both the famous and infamous names of English history.

Shakespeare and the Globe Theatre
Dr. Samuel Johnson – the Diarist and scholar (One-time General Manager of the Brewery adjoining)
Boswell the Writer
The Thrale’s of Streatham
The Clink Prison adjoining
The Bear Gardens of Bankside
The “Stews’ of Bankside
Rose Alley, Paris Garden, Clink Street and Globe Alley, Deadman’s Place (now Park Street) are but a few of such names and if you think of these, together with Southwark Cathedral, and the Southwark Brewery, your thoughts encompass the Anchor.

Southwark has long ceased to be recognisable to the Burbage’s original Company of the ‘Globe’ Theatre, but even today traces of their historic past remain.

The original ‘Anchor’ was destroyed by a devastating fire in 1676, and the present house was built on the same site. For centuries it has stood its ground, and has survived two world wars.

It is a haven of history which has jealously guarded from descration through the ages. This tiny corner of Bankside, set amidst the towering cranes and warehouses, is a must for all who visit London, and wish to savour its past.

Today on twentieth-century Bankside, you will find it, much as it was two centuries ago. It forms a corner post to nine and a half acres of historic ground, covered by its Parent Brewery. This was the Brewery which has prospered and grown since it first commenced trading as the common Brewhouse of James Monger. Monger lived in the days of Elizabeth 1.

It was from this Brewery, famous for its ‘Russian Stout’ specially brewed for the Empress of Russia, that Dr. Johnson then acting as an executor for Mrs. Thrale made one of his famous statements when ‘Bustling about with an inkhorn and quill pen in his buttonhole, like an exciseman’, he said ‘I am not selling a parcel of boilers and vats – but the potentiality of growing rich beyond the dreams of avarice’.

The intervening centuries have little changed the ‘Anchor’ and the extensions are Elizabethan II. The Architecture of the period having been faithfully reproduced.

The history and story are all there for you to find from the Thrale Room to the Ale Bar, Dr. Johnson’s Parlour, the Globe Bar, Clink Bar, the Boswell Bar, the Galleries, the Boswell Grill, the Elizabethan Long Gallery Restaurant and finally you will find one of the finest examples of Georgian Pine Panelling in the Shakespeare Room.

It was from this little corner of Southwark that English expressions such as :-

‘Putting a man in Clink’
‘Being on the fiddle’

came, as the infamous Southwark Debtors Prison ‘The Clink’, had a fiddle as its sign.

From the riverside viewing platform you will see unique views of the City, St. Paul’s Cathedral. The Tower of London, Tower Bridge and London Bridge.

Today you will find at The Anchor a clientele as cosmopolitan as London itself. All enjoying the Good Fellowship, Good Food and Good Ale which is truly a part of the English scene.

‘There is no place – said he – in which people can enjoy themselves so well as a capital Tavern or Inn’
‘Boswell’s Life of Johnson, 1771’

‘There is no love so sincere – say we – as the love of good food and liquor’
Anchor Hotels and Taverns, 1967 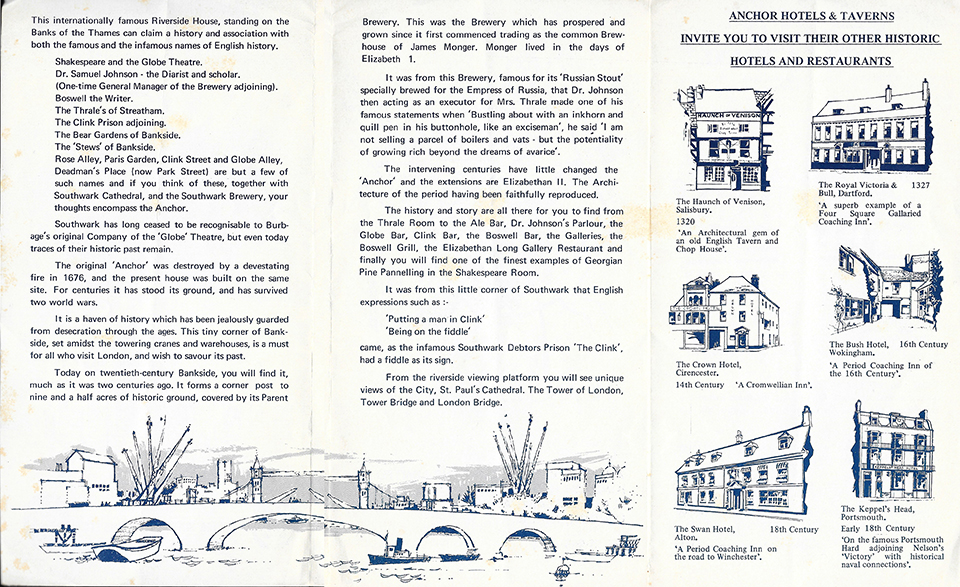 Filed under: London History and Tagged: Bear Gardens, Clink Prison, Dr Johnson, Globe Theatre, Paris Garden, Park Street, pinetop's boogiemen, Rose Alley, Southwark Cathedral, The Anchor Bankside
← Previous Next →
We use cookies on our website to give you the most relevant experience by remembering your preferences and repeat visits. By clicking “Accept All”, you consent to the use of ALL the cookies. However, you may visit "Cookie Settings" to provide a controlled consent.
Cookie SettingsAccept All
Manage consent