Bermondsey Street – still on the map

This wood engraving depicting Bermondsey Street in 1845 is the earliest illustrative image showing the street in full length that I have seen. It is a close-up from ‘Panorama of London‘ by Frederick James Smyth, which I first came across on a visit to the Maritime Museum in Greenwich in 2014. Smyth was commissioned by the Illustrated London News and his finished work was originally issued as a 12 page supplement. The full sized illustration (shown below) captures Vauxhall in the west, through central London and across to Greenwich in the east and had a total length of over seven and half feet wide (2370mm).

The only truly recognisable building in Bermondsey Street to the modern eye is the church of St Mary Magdalen, which underwent an extensive Gothic makeover under the guidance of George Porter in 1830. In Smyth’s illustration, the church appears set back from the road, which was certainly not the case in an earlier illustration of the church (rebuilt in 1676) which shows a portico stretching over the pavement and fronting the road. Given that Smyth was working on such a extensive brief, my view is that this was either an error or that he applied a little artistic license which went uncorrected.

A close up of Greenwood’s 1827 Map of London reveals that Bermondsey Street did jut out near to the junction with Abbey Street where the Watch House Cafe is today. The Old Rectory isn’t shown in Smyth’s picture but we should consider that he won’t have included every single building. It’s possible also, that the Rectory is not as old as it looks. This is certainly the case with the Time and Talents building next door, which was built in 1899. 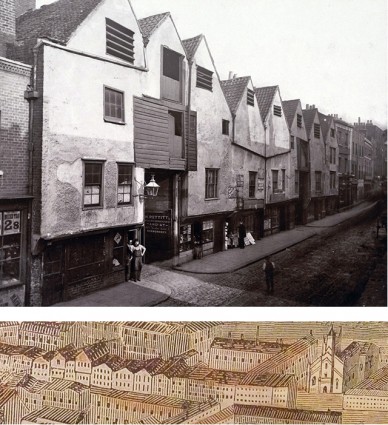 Smyth’s illustration proves helpful in locating the row of shops photographed by Alfred Henry Bool in 1880. Buildings matching the roof line of those in Bool’s view of Bermondsey Street are visible and these confirm the position I had identified in my earlier research.

The opening of Tower Bridge Road in 1902 may possibly have saved Bermondsey Street from town planners and from wholesale redevelopment during the 20th century – had it stayed as a main route to the [Old] Kent Road. The street’s character remained largely intact and the creation of the conservation area in 1973 formally recognised it’s importance. The mural which adorned the side of 4 Tanner Street celebrated many of the locals who were active during that time. 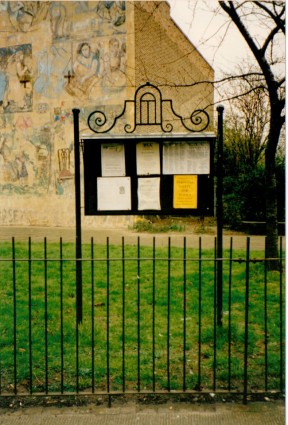 Bermondsey Street has evolved and changed several times over the centuries, with the coming and going of different industries. The extensive leather works, tanneries and associated industries have long gone, and the antiques trade which arrived and settled following the relocation of the New Caledonion Market in 1949 has largely moved on. 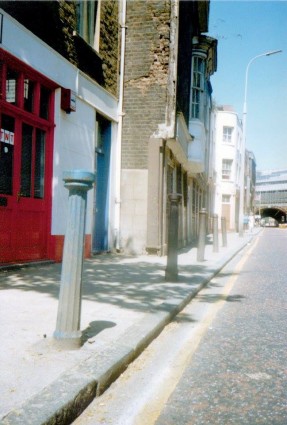 By the turn of 1990, only retail and food presence were Rose’s Cafe, the newsagent, the Post Office, George the barber, plus the Marigold, the Woolpack and the Yorkshire Grey. You could often walk from one end of Bermondsey Street to the other without passing a single person. Redevelopment was inevitable and it was just a question of …when?

The formation of the Bermondsey Street Association (now BermondseyStreet.London) and Leathermarket JMB in the 1990’s saw both organisations taking instrumental roles in supporting the local area, with additional support coming from Bermondsey Village Hall. Improvements to local estates, the building of a new playground and a partnership with the Civic Trust are testament to this.

The pace of change in SE1 generally over the past 10 to 15 years has been quite staggering. Some developments in Bermondsey Street, such as the Fashion and Textile Museum have had a real effect in helping to revitalise the area and the growth of small, independent shops, restaurants and businesses have also added to the area, where before, there was nothing.

The building of the Shard, beautiful as it is, offers nothing at street level, yet has changed everything for London Bridge and the surrounding area. The character of Bermondsey Street lying in it’s shadow is under threat like never before, and some shops and restaurants have recently succumbed to steep rent rises. This trend is likely to accelerate, especially once the redevelopment of London Bridge Station is complete.

Property developers and estate agents have been marketing SE1 directly to investors in the Far East for some time and this wealth outside of the UK will continue to drive change across the area south of river. New ‘affordable housing to rent’ is a scarcity and ‘affordable housing to buy’ a near impossibility for most, given the rise in land values across London. Many of those who have lived in Bermondsey for generations have understandably felt pushed out where a better solution would have been to make room for everybody.

Alfred Bool took his victorian photos of Bermondsey at a time when the street was under threat of redevelopment and Frederick James Smyth’s 1845 woodcut serves as a reminder that redevelopment is a cycle which has all happened before. I wonder in 100 years time, if St Mary Magdalen will be the only recognisable building still standing? Maybe by then it will be due a makeover, and if this happens, this too won’t be the first time.

The closest I could get to creating a panorama of Bermondsey Street was from the top of Simla House in Weston Street. St Mary Magdalen is still visible if you look closely. Click this link or on the letterbox image below to see a much larger image. 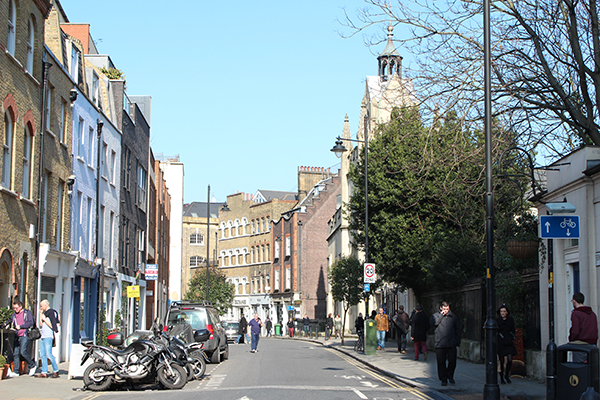 Pinterest
Filed under: London History and Tagged: Alfred Henry Bool, Bermondsey Square, Bermondsey Street, Bermondsey Street Association, Bermondsey Village Hall, Frederick James Smyth, George Porter, John Buckler, London Bridge Station, New Caledonian Market, Old Kent Road, St Mary Magdalen, Tanner Street, The Marigold, The Shard, Time and Talents, Tower Bridge Road, Watch House, Weston Street, Woolpack, Yorkshire Grey
← Previous Next →
We use cookies on our website to give you the most relevant experience by remembering your preferences and repeat visits. By clicking “Accept All”, you consent to the use of ALL the cookies. However, you may visit "Cookie Settings" to provide a controlled consent.
Cookie SettingsAccept All
Manage consent